A Frankfort native and Western Kentucky University alumnus, Bryan began his insurance career as a marketing representative in 1997 for the then newly formed Nelson/Monarch Insurance Services. Bryan was responsible for promoting the KEMPES public entity insurance program across the Commonwealth, as well as assisting underwriting with the development of new business.

In 2001, Nelson/Monarch merged with Arthur J. Gallagher, and Bryan was promoted to Producer/Account Executive. Focusing primarily on higher education and the public entity sector, Bryan remained with Arthur J. Gallagher until April, 2008, when he decided to join Commonwealth Risk Solutions, Ltd., a member of the Nelson Insurance Group. There, Bryan has remained committed to providing insurance to educational institutions, public entities, petroleum marketers, and agri-business accounts.

Bryan, a Louisville resident, is married to the former Anne Burt of Bowling Green, Kentucky, and has two children, Jack and Mary. 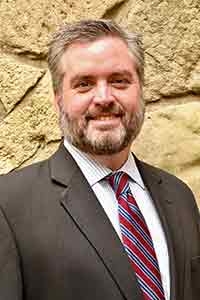